From FSITLC
Jump to: navigation, search

ยี่ห้อ means 'brand' or 'trade name'. Observe the use in the following sentences:

If อะไร 'what kind' is used after the noun in a question, several answers are possible, as is shown in the examples below:

Brand names are sometimes attached to the name of the product in advertising, as In the following examples:

In the case of some very well-known products the trade name may be the main identifying feature of the name:

But notice the difference in usage in the following examples:

(1) In 4.1 you were given a list of classifiers and a general description of classifiers. In succeeding lessons you have been introduced to more of them. You arenow aware that in many types of Noun Phrases the classifier must occur with the noun; therefore, it is imperative that you know which classifier is associated with which noun. In general it is probably just as simple to learn the classifier of a noun at the same time that you learn the noun (just as you might learn the gender class of a noun in German or French) without reference to the meaning of the noun. However, since there are some cases in which the classifier of a noun is predictable from the meaning of the noun, a more nearly complete list of classifiers is given below. This may help you remember the ones you have already had better, since it's easier to see the 'logic' of the system if you already know the nouns and their classifiers, and it should help you guess which classifier to use with nouns you will learn.

An exception is บุหรี่หนึ่งตัว a cigarette

(1) The information given here is taken from Noss, 106. Examples have been added to make the points clearer.

ที่ 'that which, the one(s) which, such ones as, etc.' serves as a nominalizer (i.e. an agent for creating nouns) of Verb Phrases (and Sentences) as in the following example: 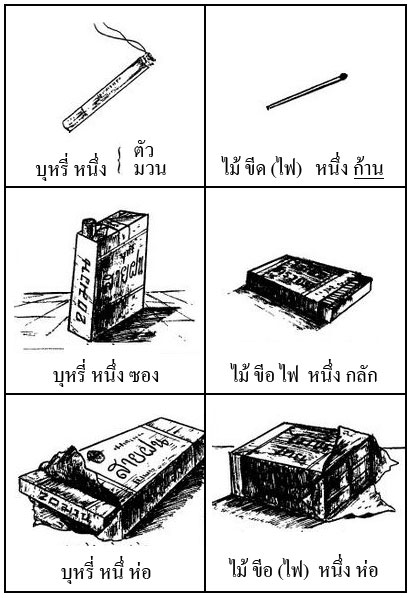 Have one student take the part of a store clerk and another that of a customer. Have them go through the routine of purchasing various items, such as:

The clerk asks the brand, kind, and size the customer wants. When he is told, he indicates what the price is. Then the customer inquires if there is anything cheaper (better, etc.). Then he gives the clerk a bill and asks for change.